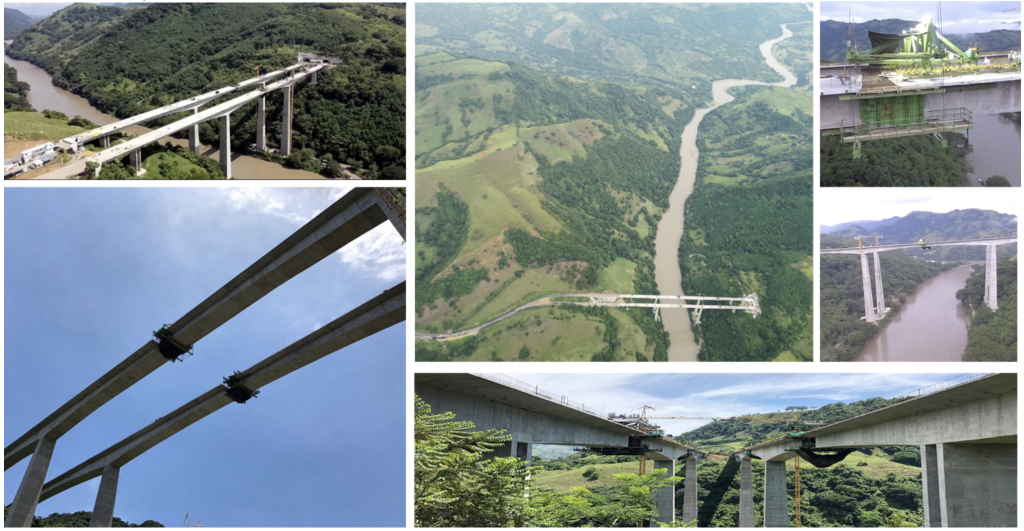 October 9th, 2020. Grupo Argos and its concessions company Odinsa continue to advance in their purpose of contributing to the connectivity and competitiveness of the country. The companies reported this Friday, together with their La Pintada Concession, in charge of the Pacífico 2 Project in Antioquia, the achievement of two new construction milestones with which the project advances steadily in its execution and contribution to the development of the region.

The closure of segments of the Cauca Bridges is a great engineering milestone of the Pacífico 2 project in which both work fronts were found, advancing from each end of the bridge, enabling side-to-side circulation.

This important and iconic project work is made up of 490-meter-long bridges that rise up to 112 meters over the Cauca River, a little more than half the height of the Colpatria Tower, in Bogotá.

The closure of the bridge implies a very important step in the mission of connecting the south with the center and the north of the country, with works that meet the highest quality standards to contribute to the connectivity, development and competitiveness of Colombia.

Additionally, the President of the Republic opened the new Operations Control Center, which will function as a space for community use to promote the integration and performance of various social and cultural activities.

It is an infrastructure designed by the renowned Colombian architect Giancarlo Mazzanti, inspired by the coffee farms in the region and whose highly visible red roof makes it an aerial reference.

The Operations Control Center is equipped with modern technological tools for monitoring the safety of road users and, in addition, it will become a place for community use to carry out various social, cultural and pedagogical activities such as farmers markets and tourism wheels, among others.

The new work made its official opening at an event chaired by the companies, the President of the Republic Iván Duque Márquez, the Minister of Transportation Ángela María Orozco and the President of the ANI, Manuel Felipe Gutiérrez, which was attended by the Governor (e) of Antioquia and the mayors of the municipalities close to the project and some representatives of other entities.

“The Pacific II Connection project is a forceful and tangible example of the confidence that Argos Business Group has in the country, in the institutions and in the promotion of infrastructure that the National Government has led. At Grupo Argos, we will continue developing transformational projects that create social value and contribute to economic revitalization and a prompt reactivation,” said Jorge Mario Velásquez, president of Grupo Empresarial Argos.

“We celebrate this new milestone in engineering, sustainability and social management reached by the Pacífico 2 Concession, a project that has contributed to the connectivity of the region, its social and economic strengthening and environmental care,” said Mauricio Ossa, president of Odinsa.

These milestones add to the outstanding management of the project throughout its execution, which has generated more than 3,500 jobs and has achieved other important achievements in terms of financing, operations, infrastructure, and social and environmental management.